How Are Companies Handling The Shift to Remote Work? 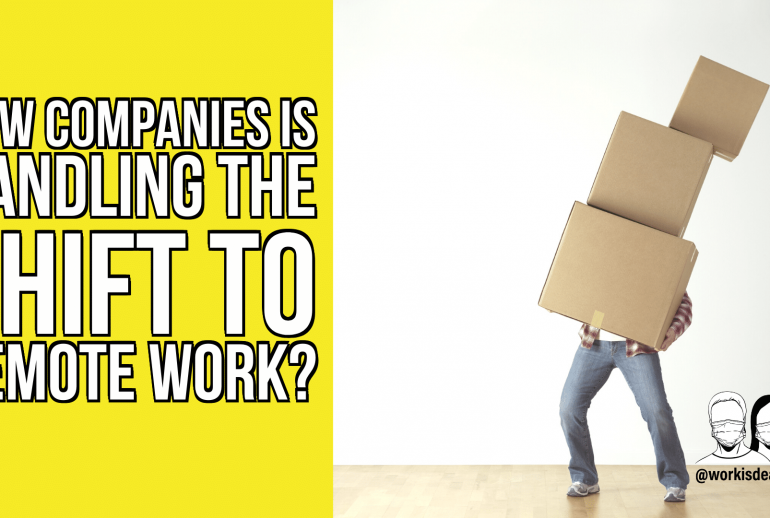 As we cautiously poke around in a post-pandemic world, businesses across the globe are wondering if the office will ever go back to what it was. COVID-19 has sparked a rapid change in our workplace, and companies are forced to learn as they go along. It wasn’t too long ago that we are talking about offices with standing desks as being forward-thinking. It’s not just the loss of a physical space that is worrying. If you own a business, you will be worried about losing the culture and camaraderie you spent so long building up. Here’s how three companies around the world are preserving their company culture during this shift to remote work.

The team at work management software company Smartsheet is set up to work from anywhere. However, that’s just in theory. When they transitioned to full-time remote work, employees had to head back to their office still. This is because they did not have the necessary infrastructure at home, such as to monitor screens or comfortable office chairs. In addition, Smartsheet recreates some office chatter through virtual happy hours. Praerit Garg, the CTO, also noticed that teams in the head office no longer dominate conversations. With online communication channels, everyone starts from an equal playing field. He believes that even after the pandemic, the appetite for remote work should stick. People will not want to make the morning commute now that they have seen what life is like without it.

When stepping into this current climate, Business Continuity Planning (BCP) was all the rage. However, it is hard to imagine one that could have adequately prepared you for such a large-scale shutdown. Thankfully for TIBCO, their BCP was geared towards the right direction, and it took just a little expansion and extension to get things ready for remote work. Even though it was not designed for a pandemic, the goal to “get back to a normal situation in an abnormal crisis” was well-aligned with what the company needs. Their inclination towards communications and collaboration tools such as Slack and Zoom also made the transition easier. Matt Quinn, the COO at TIBCO, transitioned the company in levels.

At Level 1, executives identified the core group of employees that would work from home before a full swing towards remote. In Level 2, TIBCO then began to close their offices, some in conjunction with local authorities. However, most of it was a proactive decision. By Level 3, most of the employees are working from home. TIBCO then identified the changes it needed to make systematically for consistency. This is to close up any gaps in productivity or security that arose. It certainly helped that the company was already familiar with tools like Slack and Zoom that made remote work possible. In the long run, Quinn believes that the key to business performance is “ensuring company culture and the values instilled in employees remain”. Cultures are falsely tied to having a cool office. Now that this has been taken away, you are left with values and trust that exists between your team to tide you through this storm.

For cybersecurity company Balbix, it’s business as usual. The move to remote work had no impact from a collaboration and work perspective, according to Vinay Sridhara, the CTO. The company merely made adjustments to their existing workflow. This is because the company always had the minimal infrastructure, which means less to move online. Even their lab is accessible through the VPN. That being said, they did face some changes when it comes to conversations with customers. Sridhara noticed that people ask a lot more questions now. This could be because there is a flight to quality, and focus has shifted to products that can do more than one thing. They need more service with one subscription, and the company has had to value-add its product to cater to offerings with multiple functionalities.

If you haven’t already, join our tribe at WorkisDead.com to access more exclusive content on remote working.

Virtual Hunts are not only fun but can also be customised to align with your session objectives. YOUR TEAM will achieve improved interpersonal relationships in 90 minutes.

In order for any company’s success formula to go off without a hitch, it must first ensure its people are happy and taken care of. You can lead the way by organising a Virtual Family Day event for your company this year.

Everyone wants to feel appreciated and escape the daily grind sometimes, but there is no easy way for companies to show appreciation to their employees in these challenging times. Until now.

Copyright 2021. All Rights Reserved.
Get Out!® is a registered trademark of Get Out Pte Ltd.

Powered by Get Out!®